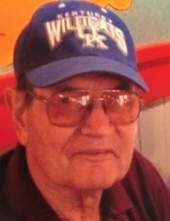 Bill was born November26, 1939 in Ashland to the late Raymond and Lennie Renfroe Stone.
He was a 1957 graduate of Ashland High School, a member of Fred M. Gross Lodge #953 F&AM, an avid bowler and was a member of the Greater Ashland Bowling Association Hall of Fame, He spent many springs coaching and managing Little League and Babe Ruth baseball teams. Bill was… retried from AK Steel where he retired after 38 years of service as a brick layer.

Surviving are his wife of 60 years Doris McConnell Stone; one son John Erik and daughter in law Desirae Stone of Westwood; three grandchildren Kayla Stratton of Ashland, Kristen Cook of Sandy Hook and Tyler Stone of Westwood; six great-grandchildren Bryden, Laney, Kennedi, Madilyn, Gunner and Edie; along with a host of extended family and friends.

Online condolences may be left at canifffuneralhome.com