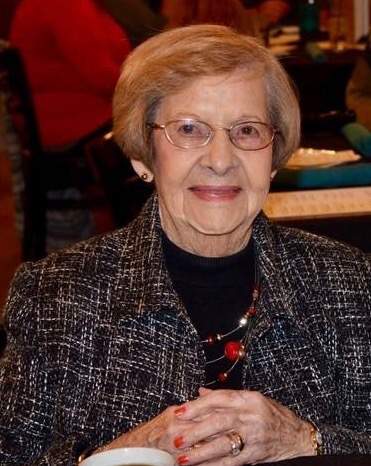 Minnie Kimbleton was born on November 18, 1922 in Carter County, KY and passed away Monday August 5, 2019 after a brief illness.  She is the wife of Ova Kimbleton of Ashland and they celebrated their 68th wedding anniversary in June.  She was predeceased by her parents, Mabel and Charles Safreed, and her siblings Kathleen Smith Knight and Mary Ellen Crace.  She is survived by her husband Ova, and her daughter Melissa Cathers (David), her grandchildren Michael Boggs (Christy), Matthew Boggs (Megan), and Ashley Jackson (Craig).  She has seven great grandchildren, Abby, Andrew and Avery Boggs, Peyton Boggs, and Nola, Allman, and Wakely Jackson.  She is also survived by a nephew Charles Smith (Linda) and several other family members.

Growing up in Kilgore, Kentucky, Minnie was the valedictorian of her class in high school.  She continued her education after high school and earned her certification as an administrative assistant.  She married Ova on June 24, 1951 and they made their home in Ashland.  She worked with her husband in his accounting office and supported him in other business ventures.  Minnie was active in her daughter’s elementary, serving in various offices in the PTA and as a brownie troop leader.  She was an active supporter of her grandchildren and attended their sporting and school events.

Minnie was an avid Kentucky basketball fan and loved cheering on her “Cats”.  She loved flowers and was for many years an active member of garden club where she participated in community activities and in garden shows.  She was also an avid bridge player, enjoying playing with her friends both at home and in bridge club. She and Ova have been members at the Bellefonte County Club since 1978 and she enjoyed playing bridge and other activities there.

Minnie was a strong proponent of community involvement, and she and Ova were regular volunteers together at “Fresh Start” at the Neighborhood.

Minnie and Ova were longtime members of the Continental Dance club where they learned many types of ballroom dances.  They loved to dance together, whether at a formal dance or dancing at home to reruns of “Lawrence Welk” every week until she became ill.

Minnie loved her family and family included both those who were born into the family but also those who joined the family through marriage.  Minnie was lovingly referred to as “Nana” by her grandchildren and great-grandchildren.  She was never afraid to politely voice her opinion by starting out her sentence with “Well, I say …” followed by something that she needed to share, whether it would be something that would be well received or not.  Nevertheless, Nana was the biggest supporter of her family and always let everyone know!

A service celebrating her life will be held Friday, August 9 at 2:00 pm at Lazear Funeral Home in Ashland.  Visitation will be prior to the service from 12:00 to 2:00.